Pearl Rally Routes a mix of Stretch and tight stages

The Shell V-power Pearl of Africa Uganda Rally clerk of the course has said that this year’s rally will give drivers a different experience.

It’s a mix of Stretch and tight stages

Katende Mukiibi told FMU online that the routes unlike in the past when most of the routes were tight, this time the drivers have room for breath as it is a mix of tight and stretches.

“There sections which will call for skills because they are technical with several tight corners, but there those parts of the stages with long stretches that will call for speed,” Mukiibi noted. 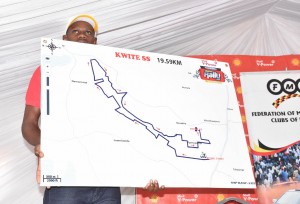 Alook of the 19.59km Kitwe section being displayed at the launch.PHOTO BY Kinthan Images.

The tight stretches will favour drivers with cars like Skoda and Subaru N14 which are short chasis while the stretches will give the Mitsubishi Evolution Lancer 10 aka beast advantage.

Over 51 Crews to compete

The rally starts with a spectators’ stage in Busiika Luwero district on Friday before heading to Kayunga on Saturday for gruelling battle in the remaining eight sections.