Two year’s without tasting victory in the Pearl of Africa Uganda rally, local drivers are targeting to break that jinx in this year’s edition due next month in Luwero and Kayunga district.

Vivo Energy under their Shell V-Power brand this year committed sh110m to this year’s edition of the rally.

“We want to thank Shell for their dedication to motorsport in the country and as drivers we are plotting to dominate the podium at the end of the rally by taking 1, 2, 3 positions,” Blick Jr stated on behalf of the local crews. 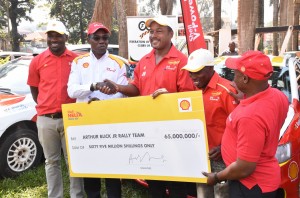 Hassan Alwi is the last Ugandan driver to win the Pearl rally which in 2016 that was in Mubende district while Ponsiano Lwakataka and Jas Mangat won it in 2011 and 2013 respectively.

According to Clerk of the Course Katende Mukiibi, the three-day will start with a super special Stage in Busiika on Friday August 2 and then head to Kayunga for final day.

“The roads are in good shape and after the super special stage we shall head to Kayunga on day two where drivers will battle it out in eight sections,” Katende said.

The four stages will then be repeated in the afternoon and the rally is expected to end at 6pm.

“We are committed to supporting the Pearl of Africa rally, but must ensure that safety standards are not compromised,” Assi said.

The Event is slated for August 2-3 in Luwero & Kayunga.