After upgrading from a Subaru N8 to a more powerful Subaru Impreza N14, rally driver John Burrows Lumu has cautioned top crews not to underestimate his potentials in shell V-Power Pearl of Africa Uganda Rally.

Burrows finished 9th and 12th in 2012 and 2017 respectively eyes top five position in this year’s edition that will cover 192.4kms competitive stages. 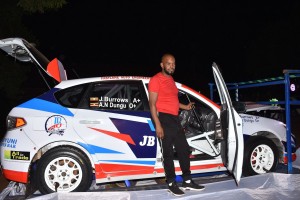 “The car has enough power boosts and I’m going to push for the top five positions in this event,” Burrows told FMU online team after unveiling the new car.

The Shell V-Power Pearl of Uganda Rally has always been the toughest and most competitive event on the Federation of Motorsport Clubs of Uganda (FMU) calendar and promises the same this year.