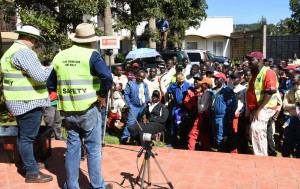 Drivers being briefed on time clocks.

Round 5 of the African Rally Championship

After the 4.8km super stage tomorrow, the crews will take the fight in Kayunga where they a battle it out in eight stages totalling to 192.4kms.