Unlike in the past when the event would be short of route openers, this time they are more than enough to ensure the routes are safe for the competitors.

By end of the scruitneering this Thursday evening, Desh Kananura of Desh Racing team (DRT) and Rajiv Ruparellia had confirmed opening the routes starting with the super special stage at Busiika on Friday. 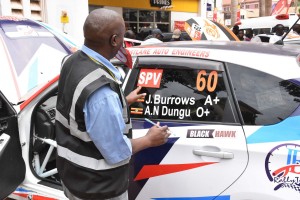 FMU Online in an exclusive interview with desh he said,” I’m ready and I want to gauge my self before we return to action next season.”
Ambrose Byona also passed scruitneering and his Evo 10 was ready for action as he said,” We are coming to enjoy, but we shall give the big boys pace.”

Tanzanian driver Dharam Pandya also said,” I can not guarantee winning but I can assure you that at the end of the event, I would have won soukls in uganda .
Uganda driver Yasin Nasser also when contacted said,” We are going to enjoy and Ishah Allah, the top five will be in our hands.”