Uganda Peoples defence Forces has come in to support the Federation of Motorsport Clubs of Uganda on safety during the Shell V-Power Pearl of Africa Uganda Rally start on Friday August 2 with the Super Special Stage at Busiika in Luwero district.

“UPDF has given us two helicopters on top of the field force. One will be monitoring the event and another on standby for any emergency,” Event manager Dusman Okee confirmed the development. 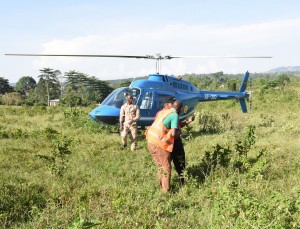 Okee lands a chopper in Nama .PHOTO BY Kinthan Images

He explained that this year’s event will be unique right from the super special stage which has been designed to excite fans by adding in jumps.

He also appealed to fans to take precautions on safety during the event.

About the Pearl Rally

After the 4.8km super stage tomorrow, the crews will take the fight in Kayunga where they a battle it out in eight stages totalling to 192.4kms.